Market failure in the diffusion of consumer-developed innovations : patterns in Finland 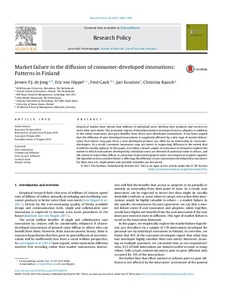 vertaisarvioitu
©2015 The Authors. Published by Elsevier B.V. This is an open access article under the CC BY license, http://creativecommons.org/licenses/by/4.0/.

Empirical studies have shown that millions of individual users develop new products and services to serve their own needs. The economic impact of this phenomenon increases if and as adopters in addition to the initial innovators also gain benefits from those user-developed innovations. It has been argued that the diffusion of user-developed innovations is negatively affected by a new type of market failure: value that others may gain from a user-developed product can often be an externality to consumer-developers. As a result, consumer innovators may not invest in supporting diffusion to the extent that would be socially optimal. In this paper, we utilize a broad sample of consumers in Finland to explore the extent to which innovations developed by individual users are deemed of potential value to others, and the extent to which they diffuse as a function of perceived general value. Our empirical analysis supports the hypothesis that a market failure is affecting the diffusion of user innovations developed by consumers for their own use. Implications and possible remedies are discussed.