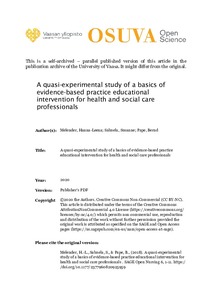 vertaisarvioitu
©2020 the Authors. Creative Commons Non-Commercial (CC BY-NC). This article is distributed under the terms of the Creative Commons AttributionNonCommercial 4.0 License (https://creativecommons.org/licenses/by-nc/4.0/) which permits non-commercial use, reproduction and distribution of the work without further permission provided the original work is attributed as specified on the SAGE and Open Access pages (https://us.sagepub.com/en-us/nam/open-access-at-sage).

Education is one of the central interventions to promote evidence-based practice (EBP) in service organizations. An educational intervention to promote EBP among health and social care professionals was implemented in a Finnish hospital. The aim of this study was to explore the outcomes of an educational intervention, focusing on the basics of EBP for health and social care professionals, using a quasi-experimental study design. The data were collected with a questionnaire before, immediately after, and 6 months after the education (n = 48). The data were analyzed with descriptive statistics and nonparametric tests. Immediately after the education, an increase was found in the EBP knowledge of participants, in participants’ confidence in their own ability to conduct database searches and read scientific articles, and in the number of participants using databases at work. Six months after the education, improvements were still found between the first and the third measurement in the participants’ knowledge and confidence in their own ability to conduct database searches and read scientific articles. The number of those who had made an initiative about a research topic regarding the development of their own work had increased from the first to the third measurement. The educational intervention produced a statistically significant improvement on most of the areas evaluated. Significant improvements were often found even 6 months after the education was finished. However, the low completion rate and a quasi-experimental before and after design limit the conclusions that can be derived from this study.