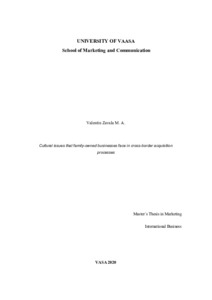 The importance and weight of Mergers and Acquisitions (M&As) in the corporate world has steadily grown in the past few decades and as the world economies themselves grow more heavily interconnected in the age of globalisation, the same weight and importance reflects in the interest governments and other international bodies put into the subject. This, has lead academic research in the M&A field to be abundant, distributed in many different historical trends and heavily concerned with figuring out the motives behind M&A transactions, as well as, the reasons behind their success or their failure. Moreover, the rapid development in global economy and the increasing number of cross-country and multi-country M&A acquisitions, has also brought to the forefront issues regarding the cultural differences between the countries of origin of the firms involved.

However, an issue rarely discussed in M&A literature concerns the relevance of family-owned business (FoBs) in the global economy and specially, the different dimensions with which they approach a M&A process. Consequently, little is known of the peculiarities of how M&A transactions are approached, managed and perceived in cross-border settings by FoBs and what role cultural differences play as catalysts for their success or failure.

Thus, being a relatively unexplored subject of study, this research strives to address this particular gap in literature. To this purpose, one main research question with three sub-questions was developed. The main question investigates what are the cultural factors that influence the acquisition process in a family-owned business in a cross-border setting. The sub-questions explore what are the main differences between non-family owned and family-owned firms, which family factors affect the success in the pre-combination phase in cross-border M&As, and what aspects of the integration and post-acquisition phases of a FoB are influenced by culture. Exploratory qualitative research was employed within this empirical study to answer the research questions through conducting thirteen semi-structured interviews within one case company. The interviewee pool consisted of members of both merging companies, involved at different stages of the acquisition process, as well as, members of the law firms that helped broker the deal. Theory-guided content analysis was then used when analysing and interpreting the data.

Results of the literature study helped to create a comprehensive typology to classify different types of family-owned businesses, which was then subsequently utilised to classify both the bidding and the target companies; additionally, it helped to create a conceptual framework to analyse the acquisition process, highlighting the way cultural differences, particularly of national nature, play an integral part in the integration process and how FoB-to-FoB M&As differ from those of listed firms. This was further enforced through the analysis of the case company interviews, as it helped to create an image of the acquisition process and decision rationale inside of a FoB, and it became apparent that every relevant aspect of the integration process is influenced by the cultural differences of the companies involved, both national and organisational culture, as pointed out in existing literature, however no evidence of cultural differences enhancing performance was found; while family-related factors (i.e., SEW, value networks, tacit approval of family members with and without decision making rights, etc) were found to play a bigger role during the pre-acquisition phase and in the formation of the integration plan