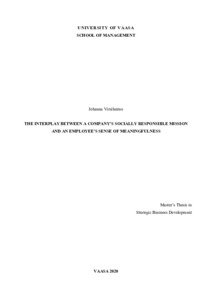 In recent years, corporate social responsibility has grown to be an increasingly important topic for companies as well as for employees. Consequently, nowadays, more companies adopt socially responsible goals as part of their missions, and at the same time, more employees desire to work in companies, where ethical values are truly put into companies’ practices. The increased desire to work in socially responsible companies might be due to that work and career have taken a more central role in individuals’ lives. Therefore, the meaning for life is often discovered through being part of a company, which mission supports an individual's personal mission. Previous researches have shown that employees who act according to a company’s mission help a company to achieve its goals. Therefore, understanding how employees make sense of companies’ missions, and how this further influence employees’ sense of meaningfulness is important to investigate to strengthen the link between a company's mission and an employee’s personal mission.

To study the research question, the study was carried out as an inductive study that uses qualitative data, collected through interviews. The interviews were conducted from a single case-company, which offered a suitable research environment because of the company’s socially responsible mission. Eleven interviewees, representing various positions at the company, were interviewed on how employees make sense of the company’s socially responsible mission, and how this is linked with their sense of meaningfulness.