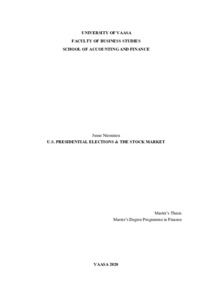 ABSTRACT
An extensive body of literature indicates that political uncertainty has an impact on the price and riskiness of financial assets. Countries with a stable political field offer companies a more predictable and reliable working environment. In developed countries, presidential elections are one of the most influential political events. United States is the world’s largest economy and the office of the president has a lot of power compared to many other developed countries. Therefore, it is intuitively plausible that U.S. presidential elections could affect the stock markets as well. Previous literature has focused on three main types of election effects: the short-term effects, the election cycle effect over the four years of the U.S presidential mandate, and the party effect, whether it’s a Republican or a Democrat candidate who wins the election.
The purpose of this thesis is to examine the short-term effects that the U.S. presidential elections have on the stock market. The data consists of daily price data from six major world indices and five presidential elections from 2000 to 2016. A special focus is on the 2016 elections. To examine the stock market reaction to the elections, an event study methodology is employed. The abnormal returns from the first trading day after the election result was announced are examined, along with three longer event windows to better grasp the stock market reactions to the elections.
The results indicate that U.S. presidential elections have a short-term impact on the stock markets, both in terms of returns and market volatility. This effect seems to be larger and clearer for U.S. markets than foreign markets. U.S. indices also behave very similarly, suggesting that diversifying across domestic markets will not protect investors from domestic political risks. Certain industries, however, are impacted differently. In particular, industries that are sensitive to regulations and government policies are impacted more. Furthermore, these types of industries seem to prefer Republican winners over Democratic ones. The results for international markets are more mixed. Overall, European markets seem to follow their U.S. counterparts more closely than Asian markets. In some cases, Asian indices even exhibited opposite reactions than U.S. markets. In the light of these results, investors should consider political elections and their effects on assets when making investment decisions.