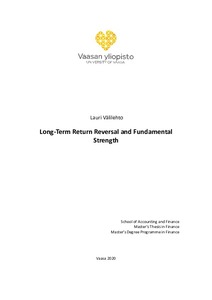 Past return-based strategies, such as reversal and momentum, have been widely discussed in academic papers. In reversal strategies, such as long-term return reversal which was first presented by De Bondt and Thaler (1985), past stock price movements in one direction are expected to reverse to opposite direction in the future. Instead of focusing only on simple long-term return reversals, the purpose of this study is to examine whether fundamental strength-based sorting can enhance the performance of the long-term reversal strategy. Firms’ fundamental strength is measured with Piotroski’s (2000) FSCORE, which consists of nine variables measuring firms’ profitability, leverage/liquidity, and operational efficiency. This study is motivated by the expectation errors framework presented by Piotroski and So (2012), who find that value/growth-strategy’s returns are concentrated in portfolios with incongruent expectations implied by firms’ FSCORE and book-to-market multiples. This study combines FSCORE with past return performance instead of pricing multiples. The hypothesis is, that reversals are strongest with high (low) fundamental strength stocks with the lowest (highest) past return performance.

The portfolios are formed by double sorting. First, the stocks are sorted to non-overlapping quartile portfolios based on the past 36 months returns, with ranking and holding periods being three years. Thereafter the winner and loser quartiles are sorted to high and low fundamental portfolios based on firms’ individual FSCORE-values. The returns for each three-year fundamental reversal portfolios are calculated as value-weighted compound returns. Traditionally equal-weighted returns have been used widely in empirical finance, but value-weighted returns are used here to have more credible results, as suggested by Hou, Xue and Zhang (2018). Risk-adjusted return performance of the strategies is measured using Sharpe (1966) and Sortino (1994) ratios. It is also examined, whether the returns of the fundamental reversal strategies are explained by the common risk factors of Fama and French (2018) three-, five-, and six-factor models.

As hypothesized, long-term past losers with high fundamental strength have stronger reversals than past losers with low fundamental strength. On the other hand, similar return reversals are not observed with past winners. FSCORE-based fundamental analysis can help to enhance future risk-adjusted returns, as past winners and losers with high fundamental strength have better risk-adjusted performance than the low fundamental counterparts. The returns of the fundamental reversal strategies are explained by the common risk factors, when the three-factor model is augmented with investment and profitability factors. In factor loading level, past losers are characterized as having conservative capital expenditures, whereas past winners tend to have aggressive capital expenditures. The results of the study are affected by survivorship bias, as the data includes only the stocks included in the S&P 1500 index at the time of collecting the data.