THE TIME-VARYING SRI AND LUXURY GOODS 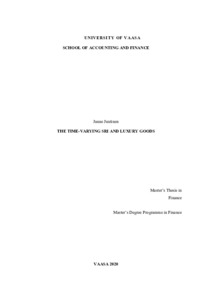 This thesis investigates the performance of Socially Responsible Investing (SRI). The thesis attempts to reveal whether it is still possible to reach abnormal returns by employing an SRI strategy based on com-panies’ nonfinancial ESG aspects. Previous academic literature displays mixed and varies evidence but also the connection between high ESG scores and positive abnormal returns have been announced by various studies. The thesis is inspired by the recent working paper of Bansal, Wu, and Yaron (2018) in which authors reveal results supporting the possibility to achieve abnormal returns. Authors find that SRI yields excess returns in wealth dependent manner leading to a conclusion that high responsible stocks behave in a fashion akin to luxury goods. Accordingly, the thesis targets to clarify if the performance of SRI is time-varying in a way suggested by Bansal et al. (2018).

Utilizing ESG data from Thomson Reuters ASSET4 database, return data of S&P 500 firms from the Datastream database and factor data from Kenneth French data library this thesis evaluates the returns of SRI by applying the Carhart’s (1997) four-factor model. ASSET4 offers five annual ratings for all companies considering the Environmental, Social, Governance, Economical and Equally Weighted di-mensions. Within each category, the top, bottom and long-short portfolio referred to as the top-minus-bottom portfolio is formed based on annual ratings of the companies. The portfolios are rebalanced at the beginning of each year based on the ratings from the previous year. Portfolios are constructed based on the 10 % cut-off rate. The monthly performance of the portfolios is evaluated over the sample period of 16 years from January 2003 to December 2018.

First, this thesis concludes that considering the whole sample period in question SRI generates significant-ly negative abnormal returns. The Equally Weighted top-minus-bottom portfolio yields a statistically significant alpha of -0.55 % per month. Secondly, to investigate the time variability of the returns the thesis employs 36-month rolling regression. Additionally, the sample period is divided into three subperi-ods including the times before, during and after the recession documented by the National Bureau of Economic Research. The thesis concludes that the performance of SRI is high time-varying and finds that the negative returns of the whole sample are driven by the significant underperformance during the post-recession era. Similar wealth dependent preference shifts in line with the findings of Bansal et al (2018) are not detected. In contrast, the evidence suggests that SRI significantly underperforms during the economically good post-recession era. Finally, the thesis examines the relationship between the per-formance of SRI and the consumption of luxury goods. The luxury goods consumption is measured by the U.S. personal consumption expenditures on jewelry and watches. The thesis concludes that a robust positive correlation between the growth of PCE on jewelry and watches and the 36-month rolling alpha of the Socially Responsible Investing is not discovered, instead the evidence rather suggests a negative correlation.