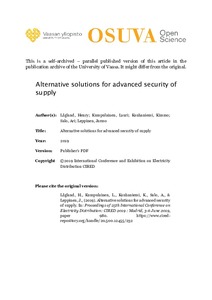 The restrictions regarding the maximal length of outages especially under major storms has resulted in massive underground cabling projects in the network companies in Finland and Sweden. Due to these expensive investments the network fees of many network companies have increased to the extent that the customers have reacted. In both countries, the authorities have announced restrictions to the rate of increase of the network fees. Thus, the network companies are now searching for alternative solutions to underground cabling. This task is here addressed by performing case studies on the network of a rural primary distribution substation area of the Vaasan Sähköverkko distribution company.Technologies surveyed include low voltage (LV) connected battery energy storage (BES), implementation of the 1000 V distribution system in low-power feeder laterals, feeder automation(FA) and both mobile and fixedbackup power generation. The impact of implementing these technologies is then compared to increasing the underground cabling level of the case study network. The results are typical investment costs, distribution system reliability indices, annual total outage costs, annual regulatory incentives and payback times of the alternative technologies as well as recommendable implementations of different technologies. The study presents a cost-effective strategy for the infrastructure of electricity distribution of sub-urban and rural distribution areas.