Negative emotions set in motion : the continued relevance of #GamerGate 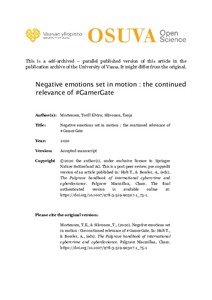 This chapter aims at making sense of the #GamerGate (#GG) online harassment campaign that was particularly active in 2014–2015 but to this day continues to produce hateful speech against certain ideologies and minorities in gaming culture. The campaign was especially successful at building online visibility through harassment, and the affective resonances of the issues it raised have since translated into general online campaigning how-to’s, financial earnings, and even political action outside of the gaming sphere. Although the primary breeding ground for this movement was 4chan (and later, 8chan), it only reached public awareness and visibility – hence, effectiveness – through Twitter and, to a lesser extent, through YouTube. In order to understand the emotional charge and political relevance of this campaign, we rely on both quantitative and qualitative activity analyses of the Twitter users that use the hashtag #GamerGate between 2014 and 2019. In addition to analyzing who were the most active tweeters and what kind of resonance their tweets elicited, we looked into the emotional qualities of their communication. The communication strategies of #GG tweeters took advantage of the language and cultural references of the target demographic to drive a set of topics into public discourse and, further, to political activism. This discourse utilized a combination of affective modes, based mainly on resentment and schadenfreude, that we see echoing in many places on the internet. In the end, we argue that while #GG may have been only one instance of a campaign with harassment elements, the sentiments it cultivated and amplified as well as its operational logics have since been successfully employed in many similar online movements, including the current political campaigning associated with the so-called alt-right.