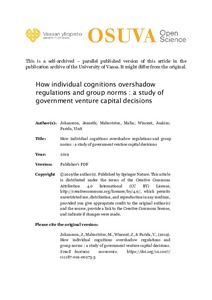 This paper explores how government venture capitalists approve or reject financing applications. Based on longitudinal observations, complemented by interviews, documentation, and secondary data, the findings show the limited influence of the regulative and normative logics (e.g., formal guidelines and accepted behavior) on government venture capitalists’ decisions. Instead, individual decisions are observed to be largely overshadowed by cognitions and heuristics, which dominate formal regulations and socially constructed group-level norms. Although official decision communications state that regulations have been followed, the evidence suggests that the cognitive logic dominates the funding decision-making process through a set of overshadowing forces that restrict the influence of the normative and regulative logics on funding decisions. This research has implications for venture financing and highlights the importance of cognitions in shaping venture capital decisions.