DEVELOPMENT OF DATABASE BASED FIELD TEST APPLICATION FOR INDUSTRY 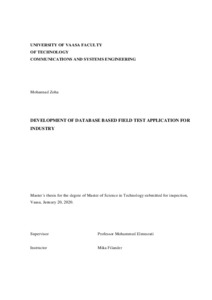 The fast development of automation has led to many different dynamics of different applications. According to worldwide statistics, the number of smartphone users has grown exponentially which also persuaded software developers and engineers to make numerous mobile applications. Generally, field testing is only carried out when there is in need of collecting important data from individuals to figure out blunders and database technology allows storing all the information. In this work, a Microsoft based PowerApps application was created for a company. The requirements necessary for the application were given by the customer and in the process of making the application, any improvements which were obligatory were also specified by the client. I have had a chance to learn the complete PowerApps UI with the resources provided by the company I work for. Firstly, the concepts of a database have been introduced to give a general idea of how the Microsoft SQL Server is used for the entire project. Secondly, there is a discussion about how PowerApps is used and how unified the system is when connecting the database server. After that, I have discussed step by step of how the PowerApps application is sending the data to the database server when a user is using the mobile application. In short, the PowerApps application provides an easier field testing approach for the workers.