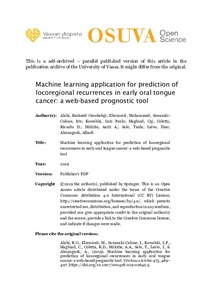 Estimation of risk of recurrence in early-stage oral tongue squamous cell carcinoma (OTSCC) remains a challenge in the field of head and neck oncology. We examined the use of artificial neural networks (ANNs) to predict recurrences in early-stage OTSCC. A Web-based tool available for public use was also developed. A feedforward neural network was trained for prediction of locoregional recurrences in early OTSCC. The trained network was used to evaluate several prognostic parameters (age, gender, T stage, WHO histologic grade, depth of invasion, tumor budding, worst pattern of invasion, perineural invasion, and lymphocytic host response). Our neural network model identified tumor budding and depth of invasion as the most important prognosticators to predict locoregional recurrence. The accuracy of the neural network was 92.7%, which was higher than that of the logistic regression model (86.5%). Our online tool provided 88.2% accuracy, 71.2% sensitivity, and 98.9% specificity. In conclusion, ANN seems to offer a unique decision-making support predicting recurrences and thus adding value for the management of early OTSCC. To the best of our knowledge, this is the first study that applied ANN for prediction of recurrence in early OTSCC and provided a Web-based tool.