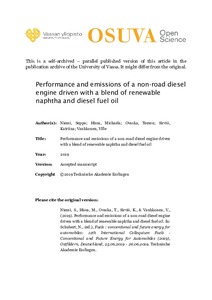 Diesel engines are still the predominant power source in heavy-duty vehicle, non-road, marine and power generation applications globally. They are reliable stand-alone machines with a high brake thermal efficiency (BTE) across a wide output range. Most diesels burn fuel derived from crude oil. However, the share of renewable fuels is growing in re-sponse to the need to reduce greenhouse gas emissions (GHG). This study evaluated the suitability of a blend of renew-able naphtha (20 vol.-%) and low-sulphur light fuel oil (LFO, 80 vol.-%) for a high-speed, non-road engine. Neat LFO served as the baseline fuel. Wood residue-based hydrotreated vegetable oil (HVO) was the study’s third test fuel. With HVO, the engine BTE was a shade higher than with the blend or LFO. HVO also reduced NOx slightly and emitted the lowest HC and the lowest PN within the entire size range of 6 to 560 nm. The blend and LFO showed similar NOx emis-sions. The blend’s HC emissions were higher than LFO’s. The blend produced the lowest particle number (PN) of above particles 23 nm: LFO produced the highest. Potent GHG compounds CH4 and N2O were negligible for all three fuels.