Selflessness in wage work : a possibility or an oxymoron? 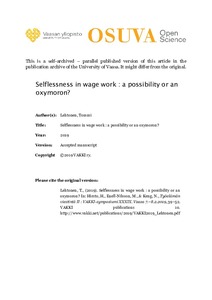 Even though a mismatch between selflessness and the logic of wage work exists, selflessness can play an important role also in wage work. In order to give grounds for this judgment, a clear understanding of concepts like altruism and desirelessness is needed. This paper expounds upon these concepts by means of philosophical literature, the discussion on the prisoner’s dilemma and the Bhagavadgīta, a classical Hindu text. On one hand, the basic rules of working life, such as a result orientation and the protection of one’s own livelihood, often work against selflessness. On the other hand, maximising the common good and benefit of organisation speaks in favour of selflessness, which is argued for by the prisoner’s dilemma and the ideal of desirelessness in the Bhagavadgīta. This paper concludes that selflessness is a situational virtue whose primary task in wage work is to advance the common good.