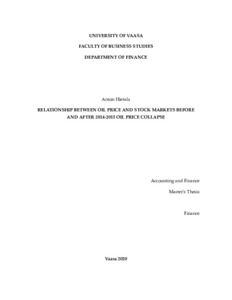 The priming of this thesis investigates the price formation of oil and stock market shares which is followed by the introduction of previous studies. The evidence of the relationship between oil price and stock markets in previous papers are introduced globally and mainly from 21-century. Majority of the previous results indicates that oil price shock affects negatively to stock markets in most of the countries with the exception of oil producer countries or companies examined. However, contrary results with none significant effect occurred also. Reason for the asymmetric results can be that the economy consists of many factors impacting the relationship of oil price and stock markets. These factors are for example changes in wages, interest rates, commodity prices, stock market behavior or changes in technology or even in political situation. Many impacting factors or changes in different commodity prices may offset the changes in energy cost which complex the effect of oil price to the stock markets.

Particularly, this research concentrates on the effect of oil price to stock markets on 2010s separately before and after the 2014 oil price collapse. The thesis investigates whether the relationship between oil and stock market is similar in the 2010s as in the previous literature and whether the price collapse has had any impact on the relationship.
The analysis is executed by conducting simpler two independent variable market models and multiple control variable models separately from time before the oil price collapse in 2014-2015 and after it. The research concentrates on important economic and oil regions including United States, Canada, Europe, Norway, China and Russia.