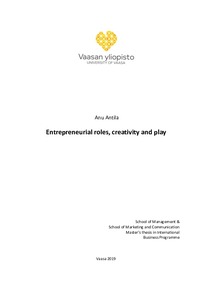 The study was conducted through an exploratory research utilizing qualitative research methodologies to analyze the findings of semi-structured interviews. The interviews were conducted to gain the insights of five entrepreneurs and their subjective approach to different types of creativity and play which they utilize in their daily entrepreneurial endeavors. In order to analyze the impact of entrepreneurial identity role on the reported types of creativity and play, the interviewees were asked which one of the roles (1) inventor identity, (2) founder identity, and (3) developer identity would best describe them.