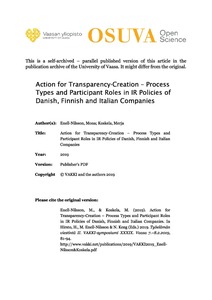 In this paper, we study Investor Relations policies of Danish, Finnish, and Italian listed companies. In these publicly available policy texts, companies outline how they intend to communicate with their stakeholders in order to achieve their goals. The aim of this paper is to shed light on the roles given to the companies and their stakeholders in the policies. The focus is on process types (finite verbs) and participant roles. The results of the study show that in the policy texts, transparency-creation is described as a material activity in which the company is the main actor and stakeholders remain in passive roles. However, there are some differences between the data sets: the company is mostly referred to by the company name, but also by we (in the Danish data), and by group (in the Italian data). Our conclusion is that transparency seems to be about doing and saying, indicating that in their policies, at least, the companies seem to take the requirements of openness seriously.