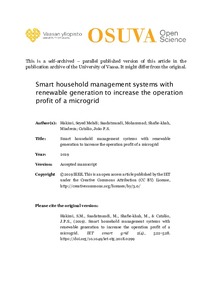 During the past few years, due to the growth of electric power consumption, generation costs as well as rises in the level of greenhouse gases efficiency bring special focus on distributed generation. Developing distributed generation resources, especially renewable energy resources, is one of the safest ways to solve such problem. These resources have been decentralised by being installed close to the houses producing few kilowatts. Therefore, there are no losses in transmission lines and provide response for demand. Based on their benefits, the use of such energy resources should be developed in the future, but its management and optimal use is a major challenge. This has become one of the main concerns ofenergy systems researchers. In the current study, an innovative model is provided as a strategic management. It is intended to optimise the operation in smart homes consisting of generation units such as a wind turbine, solar panels, storages, and un/controllable loads. The main objective of this optimisation management is to maximise microgrid profitability for 24 h. The overall results of the model proved that the profit of microgrid increased significantly.