The legitimacy of civil services in the 21st century 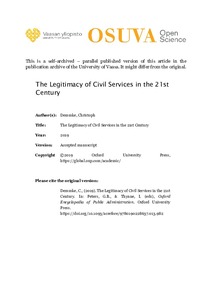 For a lengthy period, governments worldwide believed that civil servants should be linked to the authority of the state and could not be compared to employees in the private sector. This group of public employees were perceived as agents of the “Leviathan” (Hobbes), intended to uphold the rule of law and to implement government policies. In this conception, where the state was separated from society and citizens, it was inconceivable that civil servants could be compared to other employees.

Towards the end of the 20th century, in almost all countries worldwide, reform measures have encouraged the change, deconstruction and decentralization of the civil service on all fronts. In the meantime, there are now as many different categories of public employees as there are different public functions, organizations, and tasks. Overall, the number of civil servants has decreased and some countries have abolished traditional civil service features. Moreover, working conditions and working life have changed. Thus, whereas for a long time, civil servants were very different from the employees of private companies, this distinction is much less clear in the early 21st century. Such a situation had been unthinkable 10 years earlier.

Consequently, the traditional concept of the civil service as a distinct employment group and status is slowly disappearing.

In addition, current organizational reform trends have made public administration as such into a somewhat heterogeneous body. In the early 21st century, civil services have become more diverse, less hierarchical and standardized, more flexible, diverse, representative and less separated from the citizenry than they were traditionally. Whereas the term “bureaucracy” had represented clear values (hierarchy, formalism, standardization, rationality, obedience etc.), new reforms have brought with them new values, but also more conflicting ones, and value dilemmas. Whereas most governments still agree that human resource management (HRM) policies should continue to be based on rational principles such as the rule of law, equity, and equality, the increasing popularity of behavioral economics and behavioral ethics and the trend toward the delegation of responsibilities to employees through different concepts such as engagement, lifelong learning, and competency development, illustrate that current trends run counter to classical bureaucratic styles. Moreover, digitalization and flexibilization trends are changing work systems and leading to an individualization of HR practices by facilitating the monitoring and measuring of individual efforts and engagement practices.

Thus, the problem with this description of administration in the 21st century is obvious. Whereas the terms “bureaucracy” or “civil service” can be defined and broken down into concrete definitions, this is much less the case with the new civil service systems and new administrative models.