The computational efficiency of Monte Carlo breakage of articles using serial and parallel processing : a comparison 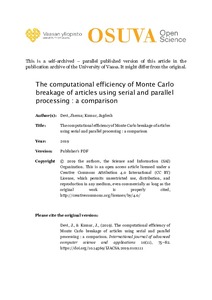 This paper presents a GPU-based parallelized and a CPU-based serial Monte-Carlo method for breakage of a particle. We compare the efficiency of the graphic card’s graphics processing unit (GPU) and the general-purpose central processing unit (CPU), in a simulation using Monte Carlo (MC) methods for processing the particle breakage. Three applications are used to compare the computational performance times, clock cycles and speedup factors, to find which platform is faster under which conditions. The architecture of the GPU is becoming increasingly programmable; it represents a potential speedup for many applications compared to the modern CPU. The objective of the paper is to compare the performance of the GPU and Intel Core i7-4790 multicore CPU. The implementation for the CPU was written in the C programming language, and the GPU implemented the kernel using Nvidia’s CUDA (Compute Unified Device Architecture). This paper compares the computational times, clock cycles and the speedup factor for a GPU and a CPU, with various simulation settings such as the number of simulation entries (SEs), for a better understanding of the GPU and CPU computational efficiency. It has been found that the number of SEs directly affects the speedup factor.