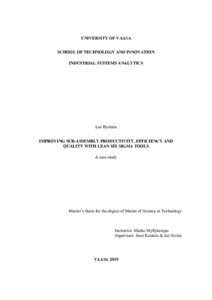 This thesis is written for the company as a case study for improving the productivity, efficiency and quality of a module assembly. The main objective of the study was to investigate the current situation of the assembly process, so that necessary improvements could be done. In parallel with this objective, a project called Andon 2.0 was done. The purpose of this project was to implement a system, which would make it more convenient for the operators to report progress and deviations in the process.
The methodology used in this case study is based on the DMAIC cycle used in Lean Six Sigma. Prior to the cycle, a theoretical background about the current situation, terminology and methodology is given.
In the Define phase the framework with the objectives and limitations for the study were formed. The cycle continued with the measure phase, in which the data from the internal ERP system was sourced. The results chapter contains the Analysis phase where the pro-cess is analysed statistically with the Pareto principle and by multiple regression analysis. The assembly process is also monitored directly. The Improve phase contained improvement proposals for all three aspects considered in this study. The last phase was customised for including the motivation, evaluation and design of the Andon 2.0 pilot version.
The process contains currently many flaws, of which the inconsistency for notifying logistic personnel of a deviation due to logistical errors conveys inefficiency. This issue was dealt with by proposing a design for the Andon 2.0 pilot version, which reduces the response time and provides process developers more accurate date for future improvements.