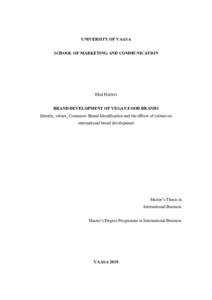 In the past few years, the vegan food industry has grown considerably. Environmental concerns, ethical considerations and health reasons have all factored in creating a demand for products called meat substitutes. Consumers have become more aware of the benefits of a plant-based diet and of the negative effects meat consumption has on the environment.

Four vegan food companies were interviewed for this study. It was found that vegan brands are predominantly based on their values, which shape the brand’s identity to a large extent, making a strong brand identity their main competitive strength. It was also found that the concept of Consumer–Brand Identification explains the success of these brands, as they have managed to place their attractive brand identity within the same value-based social group as their consumers, leading to a high level of identification between the consumer and the brand. The companies were found to have differing approaches to international brand development, as cultural adaptation and standardisation of the brand were both present, and some companies thought it was more important to appeal to the vegan consumer culture, while others preferred appealing to the local country’s culture.