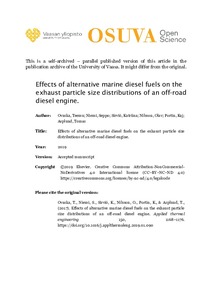 The main objective of this study was to find out how alternative fuels affect the exhaust gas particle size distribution. The fuels are later intended for marine applications. Along with low-sulfur marine light fuel oil (LFO), a high-speed off-road diesel engine was fueled by circulation-origin marine gas oil (MGO), rapeseed methyl ester (RME), crude tall oil derived renewable diesel (HVO), the 20/80 vol.-% blend of renewable naphtha and marine LFO, and kerosene. Particle size distributions were measured by means of an engine exhaust particle sizer (EEPS), but soot, gaseous emissions and the basic engine performance were also determined. During the measurements, the 4-cylinder, turbocharged, intercooled engine was run according to the non-road steady cycle complemented by an additional load point. The engine control parameters were kept constant, and any parameter optimization was not made with the studied fuels. Relative to baseline LFO, both naphtha-LFO blend and RME reduced particle numbers above the size range of 50 nm. Circulation-origin MGO and kerosene generated a high total particle number (TPN), most likely due to their higher sulfur contents. MGO and RME were beneficial in terms of carbon monoxide (CO) and hydrocarbon (HC) emissions while nitrogen oxide (NOx) emissions were the highest with RME. The differences in smoke emission were negligible.