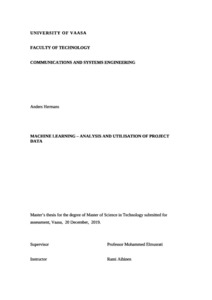 Data mining, big data and machine learning are topics that have grown increasingly popular during the last decade. Declining hard disk drives prices and advancements in technology lets us store more data to a lower cost. The amount of data that is constantly generated is also increasing due to factors like the Internet, generation of metadata from data, and social media. This thesis has been done at VEO Oy as a case study on how data mining techniques or machine learning algorithms could provide insights that could help to improve manufacturing processes of the company. VEO Oy manufactures control panels, medium voltage and low voltage switchgear that are used in various industry and power generation applications. The main source of data used in this thesis has been generated during the design stages of projects and the data is stored in several databases, such as Access and SQL. The outcome of this thesis
was a list of mined association rules between the parts that are listed in the company’s bill of material. The mined association rules could be used for rearranging the warehouse in order to optimize the placement of the parts. Another suggestion is a recommendation system add-in for the design software used in the company that would suggest the next part to the design engineer based on previously added parts.