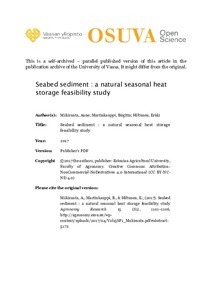 The new discovery among renewable energy resources, seabed sediment, has been utilised as a heat source for 42 houses in Vaasa since 2008. Sediment heat is annually loaded by the Sun. In this study the amount of annually charged energy is estimated. The difference of sediment temperatures between the coldest and the warmest month during the year is a key value in the approximation of the loaded energy. Sediment temperatures are measured once per month via optical cable by distributed temperature sensing (DTS) method. The monitoring period is three years, 2014–2016. The estimation of incoming energy (575 MWh) versus known exploited energy (560 MWh) is reasonable. Despite of the extraction this seasonal heat storage in the seabed of the Baltic Sea seems to reload well annually.