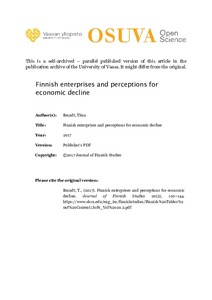 The Finnish Company Reorganization Act (FCRA) came into force on February 8, 1993. According to this legislation, a reorganization program may be undertaken in order to rehabilitate a distressed debtor’s viable business, to ensure its continued viability, and to facilitate debt arrangements. This study concentrates on fourteen Finnish entrepreneurs who were accepted into the reorganization program between 2008 and 2010. The focus here is on the entrepreneurs’ thoughts about their own behavior and their own character, and how these were connected to their economic decline, as well as their perceptions of their own strengths as entrepreneurs. The results indicate that these entrepreneurs’ strengths and weaknesses can be divided into different categories concerning working habits and character. The reasons for the weaknesses were connected to external factors such as lack of funding, high expenses, and a recession. Other reasons included problems with the entrepreneurs’ own behavior and personality. The insights into these Finnish entrepreneurs’ difficulties could help new entrepreneurs in the beginning of their careers. Additionally, the results could be used in courses on entrepreneurship, for example, in relation to helping budding entrepreneurs to understand their potential weaknesses and how to avoid the risks inherent in self-management.