The role of nutrition and health claims in the purchasing of functional beverages : Effects on purchasing intent among Finnish and American consumers 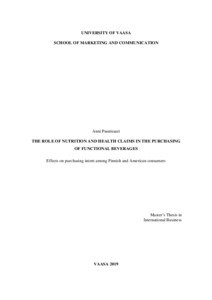 The motivation for this thesis emerged from the era of health-oriented eating. Consumers are increasingly more aware of the impact proper nutrition has on the state of health and more willing to adopt health-oriented changes into their diets and eating habits. Understanding how functional foods and beverages fit into this development and how health and nutrition claims as marketing efforts shape individuals purchasing intent is relevant for individuals, companies, and societies in promoting healthy eating. The research question of this thesis focuses on the role of health and nutrition claims in influencing the purchasing intent of functional beverages among Finnish and American consumers. Additionally, it aims to shed light on the motivations behind functional beverage purchases, explore how claims are used as a mean of marketing, and study the interplay between consumer characteristics and claims advertising – all from a cross-cultural point of view. The findings suggest that functional beverages do not share the same exceptional, positive position in the minds of consumers as other functional products. The concept of fortified waters and the claims used in them are more prone to criticism and distrust due to the health-enhancing effects being perceived as an added benefit, not a “solution” to a health problem. Furthermore, significant differences between Finnish and American consumers exist; while the former perceives consuming fortified water as a balancing act between the utilitarian value of staying healthy and the hedonic value of enjoyment, the latter acts more on personal preferences indicating a more polarized relationship between the two values. Research limitations, including the regional scope and specific characteristics of the study samples and research design, affect the generalizability of results to a wider population. Such action should be taken with caution.