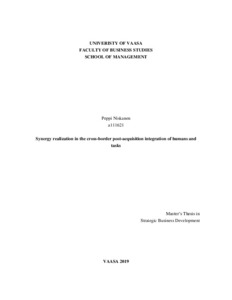 Emerging new trends have made it clear that companies need to react and adjust to ongoing changes in their industry while simultaneously sustaining their competitive advantage. As the race for strategic assets in today’s dynamic environments intensifies, mergers and acquisitions as corporate growth elements are rapidly gaining popularity. However, corporate transactions typically predispose to many challenges in the complex practical integration phase which may ultimately lead to value destruction of the given deal as discovered in the previous literature. Hence, this study examines how synergies are realized during international acquisition integration and aims to come up with an understanding what are the key elements behind it, taking into consideration the integration of both humans and tasks.

The literature review of this study consists of fundamental definition of merger and acquisition (M&A) integration by putting special focus on integration of people and tasks. The given phenomenon is being analyzed by assessing factors that either enable synergy realization or leakage. The empirical data is collected from a Finnish manufacturing company by using a qualitative semi-structured interview method. Both acquiring and target company’s experts are interviewed to increase the versatility of the research phenomenon.

The study findings indicate that synergies in human and task integration are most likely realized when the following determinants are acknowledged and implemented: strategy formulation together with professionals, transparent and consistent communication, collaborative course of action with the target company and integral departments, system and process training, choosing an integration leader, careful monitoring during and after integration and overall commitment to achievement of common goals. The key is to understand that effective task integration requires successful integration of people and vice versa.