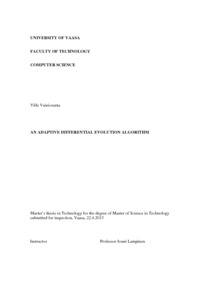 Differential Evolution is an evolutionary algorithm designed for global optimization. Its main assets are simplicity, ease of use, and effectiveness, which has been demonstrated in different research papers and evolution computation competitions. Differential Evolution has three control parameters and each of them has a significant impact on the performance of the algorithm.

The performances of the modified algorithms are compared with the original algorithm version with results on a benchmark of 25 functions provided by the “IEEE Congress on Evolutionary Computation 2005” evolution computation contest. The 25 functions are run on two different dimensions, and the results are gathered from all algorithms. The results are then analyzed and compared with each other. The main focus in the analysis is on the behavior of the control parameters for the modified algorithms.