“Those who agree to play on our terms will be taken in” : a qualitative study on the perceptions of public authorities and NGO representatives regarding self-organizing fourth-sector activity 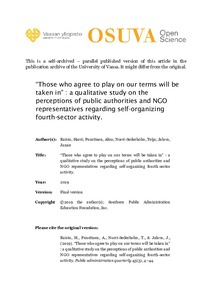 Interest is growing in the role of spontaneous volunteers and emergent citizens groups in safety and security functions. This study connects those actors to the broad concept of the self-organizing fourth sector and analyzes the opinions of more than 200 Finnish representatives of public- and the third-sector organizations gathered through interviews and small group discussion on the tensions related to fourth-sector activity. The study reveals a strong desire to control the fourth sector, a desire that dominates any associated desire to enable it. The tension between enabling and controlling can be tamed by moving the fourth-sector actors under the control of the third sector. However, the role of the fourth sector is then reduced to being merely an extra pair of hands, and its self-organizing and emergent nature is subsumed. The debate over the paradox of spontaneous volunteering needs to be resolved before the fourth sector becomes a normal and acknowledged part of the security and safety functions.