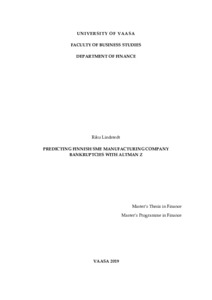 The purpose of this thesis is to examine how Altman's Z-score models can predict bankruptcy. The Z-models contain weighted ratios derived from the financial statements. The sum and result of the model, called Z-score, reflects the bankruptcy potential of the company when the score is compared to discrimination zones.

The data of the thesis consists of financial statements of Finnish SME manufacturing companies. All the companies are unlisted. Data was collected from the Bureau van Dijk's Orbis database. The sample includes a total of 80 companies, of which forty were bankrupt and forty active. The sample of active companies is chosen on a stratified random basis. In the study, Z-scores are calculated for the sample, and examined how accurately the Z-models classified the companies between the non-bankrupt and bankrupt groups. Differences between the individual financial variables included in the models are also compared.

According to results, Altman's Z''-model’s accuracy is decent when predicting Finnish SME manufacturing company bankruptcies. One year before bankruptcy, the model correctly classified 78% and two years before 71% of the companies. The model's ability to predict bankruptcy weakens significantly as the time horizon gets longer. Indeed, the classification results five years before the bankruptcy can be considered rather poor and the model does not have reliable long-term predictive power. An interesting result is the weak ability of Altman's Z' model to predict bankruptcy at any time. This is believed to be due to the fact that the model is beginning to be somewhat old in today’s global economy.