Internationalization via export growth and specialization in Finnish regions 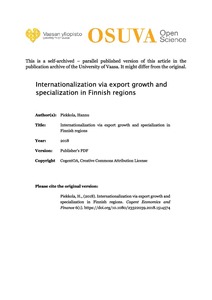 Finnish regions increased their exports in special industries from 1999 to 2013. This internationalization of industries in regions is measured by the adjusted Balassa’s revealed comparative advantage index. It has been shown that innovation potential has not increased, even though R&D drives specialization and leads to an increase in exports and an improvement in trade balance. The growth of other intangible capital, such as organizational capital (management and marketing capital) and information and communication technology (ICT), has concentrated in the greater Helsinki area, but products and services are also targeted to domestic markets and depend on imports rather than promoting exports. The physical capital
investment among the physical intensive firms has substituted imports rather than affecting exports. In a small open economy such as Finland’s, all these trends, together with foreign firms not being more export-oriented than domestic firms, call for a new industrial policy to promote R&D on a wide scale and continue regional specialization, thereby maintaining competitiveness and export growth.