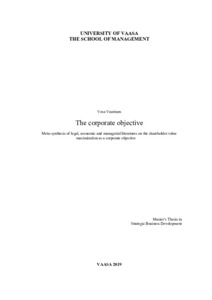 Articles from six major databases are systematically collected and reviewed to examine
the viability of the shareholder value maximization as a corporate objective. In total of 68
articles were systematically retrieved. Theoretical sampling is employed to elaborate the
depth and quality of the synthesis. The goal is to introduce ideas, historical pathways,
logics, inconsistencies and misunderstandings to provoke further investigation and
discussion. The central objective of the thesis is to either justify the shareholder value
maximization as a corporate objective or to refute its position as such.