Impact of Board Gender Diversity on Risk and Performance: Case Finland and Norway 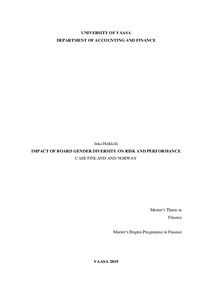 The objective of this paper is to investigate if gender diversity has an impact on corporate economic performance and risk. Furthermore, the aim is to answer if there is an economic justification for the gender quota that the European commission has proposed. This paper contributes to the existing literature by comparing two countries Norway and Finland, which both have different method of improving gender diversity in the board room.

The sample is gathered from Thomson Reuters Worldscope and the sample period is 2007-2016. Ordinary least square regression model is used to answer four main hypotheses. The dependent variables to investigate impact of gender diversity on economic performance are Return on Asset and Tobin’s Q and to investigate the impact of gender diversity on risk the dependent variables are Volatility and Debt to Asset ratio. Moreover, three diversity variables are chosen to act as a proxy for diversity, Percentage of women on board, Critical mass dummy and Blau index of diversity.

The main findings of this paper are that, regressing the full sample, the percentage of women has a positive impact on risk and performance. There can be found indications that the critical mass might not be the most optimal amount of diversity for improving the accounting performance as the coefficient was found to be negative. Companies with more diverse boards were found to be riskier which is controversial to the literature.

The results are highly country specific when two samples were regressed separately. For Finnish sample diversity has a positive impact on performance and risk but for Norwegian sample the findings are mainly negative. All in all, the main finding was that the results are country specific and there should not be a gender quota that mandates all the EU countries to have the same percentage of women on board.