The Last and The Lasting. Male Iraqi Refugees and Managing Stigmatized Identities 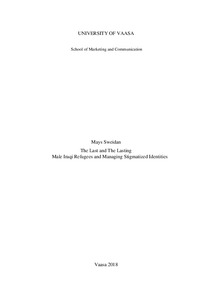 Stigma studies aim to discuss the discounted individuals and groups which have been disqualified from full social acceptance because of the discrediting attributes they hold. Even though there is a considerable amount of research on stigma. This study aims to prioritize the perceptions of people dealing with stigma by focusing on the stigmatized individual’s point of view rather than societal reaction. In this research, the focus is on how male Iraqi refugees manage through talk their stigmatized identities.
Theories on stigma management strategies, individual identity, liminality and social identity build the theoretical focus from which the data is analyzed and linked to the focus of the study. A qualitative research approach was adopted in the data collection process by using Corbin and Morse (2003) unstructured interviewing method with six participants.
The results were analyzed by using Anselm Strauss’ Grounded Theory and two common themes were found in the participants’ narrative; first, ‘The rites of passage’ in which participants viewed their stigma as a temporary stage of life due to the liminal stage they are currently in. Second, the ‘not ready yet’ discourse where participants referred their stigma to a bigger issue which is the lack of socially valued roles in the current society such as jobs or study places.