HAVE INVESTORS GROWN NUMB TO TERRORISM? Evidence from attacks in developed countries. 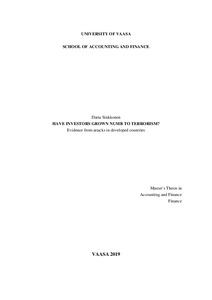 Effects of terrorist acts on financial world have been extensively studied in the past few decades. There is no doubt that terrorist acts affect the investor sentiment as it has been documented in numerous papers (e.g. Nikkinen and Vähämaa 2010; Drakos 2010; Chesney, Reshetar and Karaman 2010). Most of the previous studies have attempted to capture if certain selected events affected asset prices, how long such possible effects last and what characteristics of terrorism drive change in investor sentiment. The purpose of this thesis is to study if the investor sentiment to terror attacks has decreased over the past two and a half decades, in other words whether investors have grown numb to terrorist attacks. This study contributes to the existing literature by providing a prolonged examination of effects that modern terrorism has on stock markets. Time period used in the study ranges from 1995 to the end of 2017. Forty terrorist attacks are examined from the S&P 500, Euro Stoxx 50, FTSE 100, MSCI Europe and MSCI World indices.

Results of the empirical study suggest that, unlike hypothesized in this thesis, investor sentiment to terrorism hasn’t decreased but instead increased: investors’ negative reaction got in fact stronger from more recent attacks. Explanatory regressions also contribute to these results, by showing that between 1995 and 2010 cumulative abnormal returns were higher during the attack days. Significant results suggest that the number of people killed and wounded in the attack affected investor sentiment negatively. Individual characteristics of the attacks didn’t affect the investor sentiment in any negative way.