The Impact of Western Economic Sanctions on the Russian Banking Sector 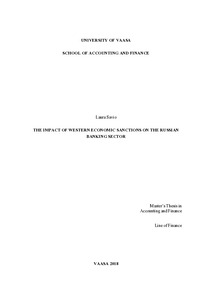 Economic sanctions are a common foreign policy tool used in international conflicts. Their main objective is to bring about a change in the target country through serious economic pressure. Since 2014, Russia has been suffering from a broad range of international economic sanctions by Western countries as a response to its actions in Ukraine. Sanctions against Russia have targeted sectors such as finance, energy, trade, defence and individuals’ assets and travel. The purpose of this study is to examine the impact of Western economic sanctions against Russia and how sanctions have impacted the riskiness and the funding structure of the Russian banking sector.

The motivation behind this study stems from the fact that even though it has been over four years since the commissioning of sanctions against Russia and with most of the sanctions still in place, only a handful of studies have come forth investigating their impact by providing quantifiable results. To examine the impact of sanctions on the Russian banking sector, the panel fixed effects approach and the differences-in-differences approach are applied as the empirical methodologies. The research period ranges from 2011 to 2016 consisting of two distinct periods: before sanctions and during sanctions. The research data consists of micro-level balance sheet data on Russian banks. This study uses overdue loans and capital adequacy as the dependent variables to account for bank risk and household deposits and corporate deposits as well as the debt ratio as proxies for bank funding structure.