You Are Being Recorded: Failed Service Encounters and Consumer Revenge in the Airline Industry 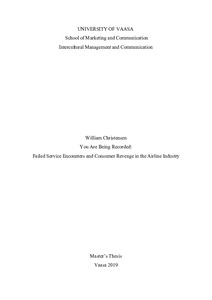 The rapid growth of social media and online content sharing platforms has shifted the scope of the traditional service encounter to also include the digital experience. These platforms have empowered consumers over service companies, and have allowed them to take action against companies whom they perceive to have failed at service delivery. The airline industry, in particular, has become a favorite target for consumer activists, as seen by the vast range of social media posts depicting ‘failed’ service encounters at the airport and on aircraft.

This thesis seeks to further define consumer revenge behaviors through the application of existing theoretical frameworks to real-world examples of negative service encounters in different airports across the globe, which are recorded and posted on the video hosting social network YouTube. To achieve this, a content analysis methodology is applied to four videos depicting negative customer service encounters. The research questions are: What kind of behaviors can be observed in the chosen service encounters? What does revenge behavior consist of within the encounters? Finally, to what degree do these behaviors influence, or are influenced by, the encounter as a whole?

An analysis of the four recorded encounters found that consumer behaviors could be classified as contextualizing, attention-seeking, or compliance behaviors, and that all supported some form of direct or indirect revenge behavior. These behaviors are influenced by levels of employee attention, and indirect behaviors are often framed by narrative behaviors.