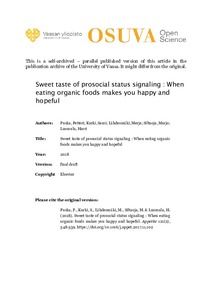 As the current research suggests that there are links between prosocial acts and status signaling (including sustainable consumer choices), we empirically study (with three experiments) whether food consumers go green to be seen. First, we examine how activating a motive for status influences prosocial organic food preferences. Then, we examine how the social visibility of the choice (private vs. public) affects these preferences. We found that when consumers' desire for status was elicited, they preferred organic food products significantly over their nonorganic counterparts; making the choice situation visible created the same effect. Finally, we go beyond consumers' evaluative and behavioral domains that have typically been addressed to investigate whether this (nonconscious) "going green to be seen" effect is also evident at the level of more physiologically-driven food responses. Indeed, status motives and reputational concerns created an improved senso-emotional experience of organic food. Specifically, when consumers were led to believe that they have to share their organic food taste experiences with others, an elevation could be detected not only in the pleasantness ratings but also in how joyful and hopeful they felt after eating a food sample. We claim that the reason for this is that a tendency to favor organic foods can be viewed as a costly signaling trait, leading to flaunting about one's prosocial tendencies. According to these findings, highlighting socially disapproved consumption motives, such as reputation management, may be an effective way to increase the relatively low sales of organic foods and thereby promote sustainable consumer behavior.