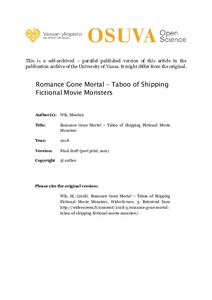 This article examines the taboo of shipping two fictional movie monsters, Pennywise the Dancing Clown and Babadook, and the way they turned into a celebrated power couple in social media. Shipping is a fan activity, in which the focus is to find romantically charged subtexts from media texts. Pennywise, an eternal entity and a demonic monster, is the main antagonist in Stephen King’s book It (1985) and its latest audiovisual version (2017). Soon after the movie’s release comments concerning the character’s ‘hotness’ filled social media. Discussion about Pennywise’s sexual appeal rose to a completely new level when fans decided that Pennywise is homosexual and in a relationship with Babadook, another horror movie character and an incarnation of repressed grief in the Australian horror movie The Babadook (2014). The article has two data sets. The primary one is collected from a social networking service Twitter and concentrates on affectivity of fan-made drawings concerning the Pennywise/Babadook pairing. The secondary one is collected from a microblogging and social networking website Tumblr and examines motives behind shipping oneself with a monster using Pennywise as an example. Attention is also given to hashtags and the way they operate as a tool to get acquainted with shipping and shipperdom.