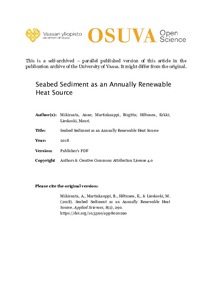 Thermal energy collected from the sediment layer under a water body has been suggested for use as a renewable heat source for a low energy network. A prototype system for using this sediment energy was installed in Suvilahti, Vaasa, in 2008 and is still in use. It provides a carbon-free heating and cooling solution as well as savings in energy costs for 42 houses. To be a real, renewable heat source, the thermal energy of the sediment layer needs to replenish annually. The goal of this paper is to verify the possible cooling or annual heat regeneration. The sediment temperatures were measured and analyzed in the years 2013–2015. The data were compared to the same period in 2008–2009. All measurements were taken in the same place. This paper also confirms the potential of the sediment heat, especially in the seabed sediment, using the temperature differences between the lowest and the highest values for the year. The results demonstrate that the collection of the heat energy does not cause permanent cooling of the sediment. This result was obtained by calculating the temperature difference between measurements in the warmest month and the month with the coldest temperatures. This indicates the extracted energy. The difference was found to be around 9.5 °C in 2008–2009, rising to around 11 °C for the years 2013–2014 and 2014–2015. This indicates the loaded energy. The energy utilization is sustainable: the sediment temperature has not permanently decreased despite the full use of the network for the heating and cooling of houses between 2008 and 2015.