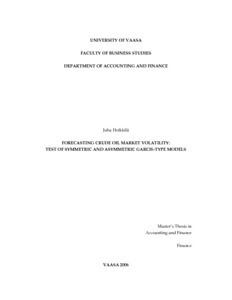 The purpose of this thesis is to compare the predictive power of three different volatility forecasting models on Brent Crude Oil Index data under two different market conditions. The models included are GARCH, TARCH, and EGARCH. The data covers the period from January 1990 to October 2005. From this overall data two periods of data is extracted both individually representing unique era in the market. First data set measures models functionality during mid 1990’s tranquil times and second measures model performance at the era of higher uncertainty in the early 2000’s.

Four hypotheses were formed in this study based on the findings in earlier studies. The first hypothesis suggests that the more complex model should generate most accurate forecasts. Second hypothesis inspected if the asymmetric volatility model results more accurate forecasts than the symmetric model. The third hypothesis stated that more volatile period results inferior volatility forecasts. The final hypothesis suggested that the volatility forecasting capability is linked to forecasting horizons length and is decreasing over time.