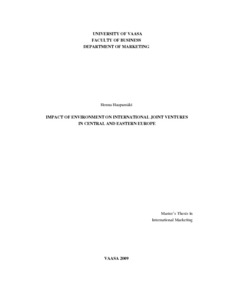 Data on country environments was collected mainly from EBRD Transition Reports. Joint ventures were studied by analysing surveys conducted in 2002 and 2007 at the University of Vaasa. The respondents of the surveys were representatives of Finnish firms that had established manufacturing joint ventures in Central and Eastern Europe. The results of this study indicate that joint ventures established in different environments vary; there are differences in the motives of investing firms, the resource contribution of partners and the performance of joint ventures.