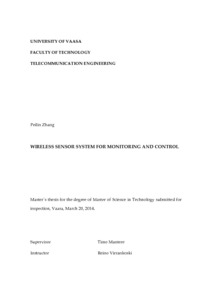 With the fast development of wireless sensor network (WSN) technology, a large number of applications have been widely used over the past few years. As a matter of fact, wireless monitoring and control system is unavoidable one of the applications that consist of WSN nodes. A generic, modular and stackable WSN node, named UWASA Node has been developed by the University of Vaasa and Aalto University lately. Besides, SurfNet node, developed by Seinäjoki University of Applied Science, is designed as low-power consumption, high-data rate, small and powerful sensor node that is suitable to implement the monitoring and control tasks under multiple conditions.

In this work, a wireless sensor system for monitoring and control is integrated and developed by one UWASA Node, one Linux board, and SurfNet nodes. Firstly, the basics of WSN including IEEE 802.15.4 and ZigBee standard are introduced. Secondly, a new design and development of the hardware and software for the wireless sensor system is explained in detail. After that, several experiments are performed to verify the system performance due to the limited computational and power source of the sensor nodes in the WSN. In one word, this developed wireless sensor system provides a wireless solution for remote monitoring and control of the deployed environment.