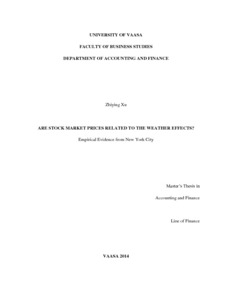 Several behavioral finance studies have proved that investor psychology fluctuations can explain some anomalies in stock market. Moreover, there are links between weather condition and stock prices via human mood. This thesis investigates the possible relationship between four weather elements (precipitation, snowfall, average daily temperature, and average daily wind speed) and stock prices in New York City. In order to examine the weather effects on stocks, daily weather data of New York City and daily closure stock prices logarithm of NASDAQ Indexes from October 3rd, 1994 (Monday) to October 1st, 2014 (Wednesday) as well as severe events data within this 20 years in New York City are used as the observations in the thesis.

Through applying both individual and combined tests of Ordinary Least Squares (OLS) regressions between weather and stock data, it is found that daily precipitation amount, snowfall amount do not have significant influences on stock prices. Average daily temperature and the dummy variable 1 (good weather) present to have positive influences on stock prices. Both coefficients of them reach the statistically significant level in most of the tests. Besides, the results also prove that average daily wind speed as well as the dummy variable 2 (bad weather) have negative correlations with stock returns. The coefficients of wind speeds are statistically significant in all tests. However, no significant evidence has been found to prove the influence of severe events on the stock market or the existence of Monday or January effect in New York City.