The relationship between crude oil price and the U.S. Dollar exchange rate 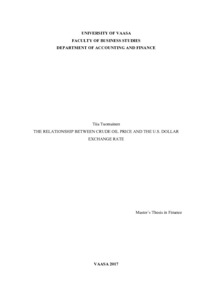 There is a wide range of studies indicating a link and a co-integrating relationship between crude oil prices and exchange rates. The previous literature mainly agrees on the strong linkage and the causal relationship between the variables moving from crude oil to exchange rates. On the other hand, there are significant results also indicating the reverse, exchange rates preceding crude oil prices. The aim of the thesis is to test whether a link and a co-integration between the variables exists. In addition, the causality will be tested.

This thesis focuses on two different crude oil benchmarks and the exchange rate of U.S. Dollar against two major oil exporters, Canada and Norway. The benchmark oil prices Brent Crude and West Texas Intermediate are chosen. These benchmarks co-move and follow closely each other. The time period investigated runs from January 2nd 2006 to August 28th 2016. The methods used for the investigation include Engle-Granger two- step method, Granger Causality test and the Error Correction Model (ECM).