Teaching Heritage Languages to Children: Perspectives of Kenyan Immigrant Mothers in Finland and their Efforts 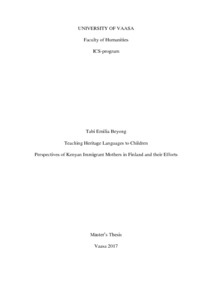 This research looks at multiculturalism and languages in the Diasporas, under the heading of heritage language teaching specifically among Kenyan immigrants in Finland. It explores the attitudes of Kenyan immigrant mothers towards Swahili, and their methods in passing on this linguistic and cultural heritage to their children in Finland. Twelve Kenyan immigrant mothers having children between the ages of two to twenty were interviewed. Using qualitative research method, the transcribed data were analyzed with the use of thematic analysis.

Results demonstrate that Swahili is viewed as a unifying language in Kenya. However, passing on Swahili as a heritage language to children in Finland is not unanimously agreed on. Many other definitive factors such as marriages to people of other nationalities, the dominance of Finnish, the benefits attached to the Finnish language, significantly influence this outcome.