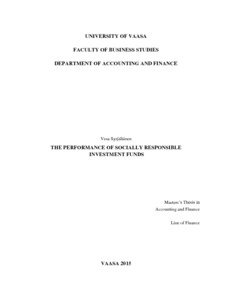 The performance of SRI-funds has been studied throughout during the last fifteen years with the most common way of evaluating the performance through comparison between the SRI-funds and conventional funds. More recent studies have examined the issue of screen-ing intensity, where the SRI-funds are compared to each other rather than conventional funds. In the empirical part of this study, the effect of positive and negative screening strat-egies to the performance of the funds in Europe during the years 2002 to 2014 is examined.