The Impact of Expatriate Assignments on Intra-Organizational Careers: A Case Study 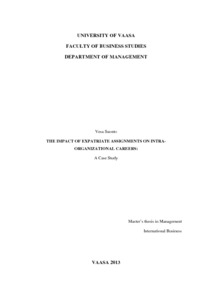 International assignments are widely regarded as requirements for top managerial positions in many multinational organizations. Many studies also confirm that individuals with international experience tend to earn more, perform better and are promoted more often. Despite this, many repatriates report that their international assignments have in fact disrupted, rather than advanced their careers. This aim of this study is examining the effects that expatriate assignments have on employees’ intra-organizational careers. Furthermore, this study examines organizational support mechanisms and their role in facilitating assignment and career success.

The theoretical section of this thesis discusses mainly existing theories of expatriate career literature. An analytical framework for this study was proposed as a product of the literature review. The qualitative research was conducted by applying a case study research strategy. The empirical part consists of semi-structured interviews of seven former expatriates working in the case company. These were conducted and analyzed using qualitative methods.

The findings of the study mostly support the notion that assignments facilitate career success. Four out of seven interviewees reported that they believed international assignments had advanced their careers and only one felt that career advancement might have been easier without assignments. In addition to external career success, the expatriates felt they had received substantial self-developmental benefits and five out of seven also believed that their value in the job-market had increased due to the assignments. However, in some cases, international assignments were seen to restrict available career options and cause a lack of networks in home country. This was seen as a restriction in moving between different jobs inside the organization.