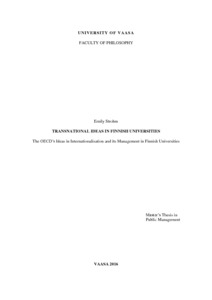 The aim of the present research is to conceptualise the way the OECD’s political incentives are transferred into the national level and see whether they manage to slide into the operations of Finnish universities. Policy transfer and agenda setting are the core concepts central to the theoretical framework of the research. The present research uses two different qualitative research methods. The qualitative content analysis is used to distinguish the Finnish higher education internationalisation policies that reflect the ideas of the OECD. The second method for the study is qualitative semi-structured interviewing. The qualitative case research includes interviews of managers of Finnish universities. The research aims to study the views that university managers have considering the national policies that reflect the ideas of the OECD.

The results of the present research indicate that the OECD is not a direct actor in the forming of national higher education internationalisation policies, as only very little reference is made to it in the official documents. However, the OECD uses indirect information steering successfully, as it has manages to highlight issues in policies that have not been considered as issues before. The OECD has influenced Finnish higher education policies through political agenda-setting. The managers of Finnish universities analyse the policies from the point of view of an individual university, taking in consideration the international setting, but also their own operating environments. Even though universities have become more marketinalized, they aim to look further, than the political atmosphere, which changes quickly according to transnational trends. Universities are highly autonomous and therefore they are responsible for their own governance. The internationalisation expectations of the government are expanding while the resources of universities are decreasing. Universities are going through challenging times and it remains to be seen if further internationalisation of universities can bring a solution.